This page is reserved for pictures and updates of my MuscleHack progress.

Two problems exist with the previous statement: I'm camera-shy, and I don't believe that the "numbers" - the weight lifted - matter. I'll happily share the weights that go along with my reps, but they're like the points on the Drew Carey Show - they just don't matter. They're just the weight I had to move at that time to accomplish my goal of continual, gradual progression. It doesn't make me any better or worse than anyone else, it just means that you can measure my progress by comparing the numbers and seeing for yourself that I am indeed progressing.

The first pics are best shown via Mark's site: "Before" and after a solid 6 months of THT. Scroll down to see me. That "after" pic was taken in late June of 2010. I hope to have a "January, 2011" pic up at the end of the month when I finish my current cycle - THT HIT. 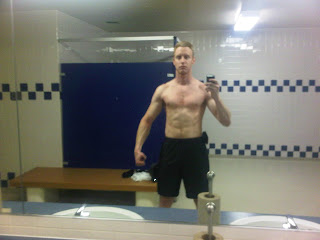 January 22, 2011 update: I'm attaching a picture from January 20th. Compare this to my June, 2010 pic at the URL above. I'm stunned and pleasantly surprised at my progress within the last 7 months. Absolutely stunned, actually. You don't notice it until you force yourself to compare to earlier shots. Time to keep going!

March 24, 2011 update: This "mini-update" comes from some fooling around. On March 21st, some of the MuscleHack Fan Page regulars started posting up bicep shots. Soon, someone dubbed the impromptu "gun show" as March Madness. I decided to join in on the fun. You've gotta remember, I am my own harshest critic.

Well, now everyone else gets to be the judge. 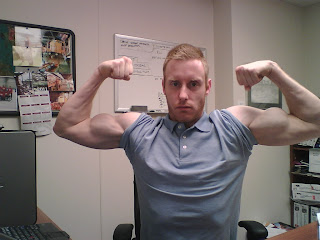 To be fair, I wasn't flexing in the same fashion as above. I have indeed progressed in the past 6 weeks of THT 2.0 Refix as planned, so my gains shouldn't be a surprise to me. This is your body on good food (and the occasional cheat day!), good basic supplements and a proper MuscleHack workout.

March 15, 2011 update: I need to actually see the earlier pic side-by-side with my current pic (below), but I think that 10 weeks of THT 2.0 Refix has been very good to me thus far. Not much left to go and then a week off! I'll be lost, I know it! 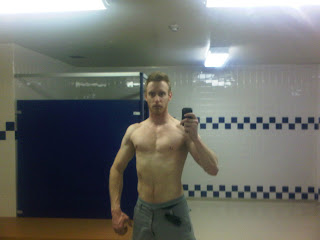 It seems to me that I've added some mass for sure everywhere, and definitely in my chest. My bench last night of 200lbs x 9 seems to be supporting evidence of that fact!

June 29, 2011 update:  It's been an eventful few months since the last update. My gains have been huge with this cycle of THT 3.1 HIT. I was also added to the new MuscleHack THT 4.0 training guide! STOKED! I'm just wrapping up week #9 of THT 3.1 HIT and will be going directly to a THT 4.0 Volume cycle (5-day). I'm adding another pic as well. 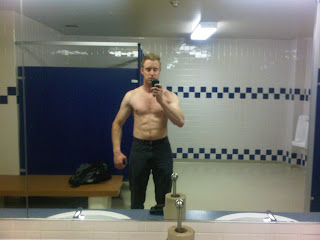 October 12, 2011 update: Clearly, I've ingested something that has made me go bonkers. I've embarked upon a new experimental path of THT / Total Anabolism 4.0 training that I've cobbled together from Mark's THT 4.0 HIT cycle. In a nutshell, you gain an extra day of weightlifting per week. You lift for 4 days straight and then you're off for 3 days straight - just to go back and start it all again. Here's a snap from the other day in the middle of my second week. 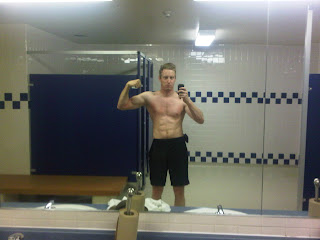 Week over week from the above photo, you can see (heck, even I can see) that my abs are definitely more defined and larger. As of this Thursday, I'll be benching 260lbs - another personal best.

How to Build Muscle!

The Home of Muscle Growth